Yes, Foxes can catch rabies from any other infected mammal – including other foxes. Just like all wild or domestic animals – once infected – they will sadly die. So always seek a doctor if bitten or scratched by a fox.

Do Foxes Have Rabies?

Yes, Foxes actually have their own variant of the rabies virus – common amongst most other fox-like canids and which circulates within that population. Similarly bats have a bat variant, raccoons have a raccoon variant etc, but they can all become infected with a different variant in any case. It is just that a fox who caught raccoon rabies won’t pass raccoon rabies on to other foxes – it will just die from its own infection.

Rabies is an acute, infectious, viral zoonotic disease (a virus with rapid-onset of severe symptoms – that is easily spread between animals and humans) caused by the lyssavirus (a rhabdovirus). This type of virus has a very wide host range and can be found in most mammal species, including foxes. It passes around the population over time and is always present in an area where populations are high because the disease causes symptoms that help spread itself between hosts.

Many foxes enter a state of delirium and frenzy when infected and behave strangely – including an increased urge to attack things and bite them. As the virus is passed on through bites and saliva – this is a very effective strategy for passing on rabies to other foxes.

If it doesn’t pass itself on to a new host before the one it is in dies – it has ‘failed’. However, many rabid foxes are found with wounds on them commonly seen after a fight with another fox or similar animal, so it certainly works well.

How Can You Tell If A Fox Has Rabies?

There is no sure-fire way of spotting a fox with rabies because there is a huge range of possible symptoms. As well as two different forms of rabies. There is either the frenzied or ‘furious’ type (where the animal is prone to aggression and biting) – or what is called ‘dumb’ rabies (where the animal becomes reclusive and its mouth and throat becomes paralyzed).

Either way – signs that an animal may well be unwell or have rabies are well noted. They often include those found in the list below – although these symptoms do not mean that a fox definitely has rabies either. Some foxes never show any signs of rabies at all – even when they are known to be carrying the disease.

Extreme – salivating excessively, having seizures or ‘paddling’ and being in a zombie-like state

If you or your pets are bitten by a fox displaying any of these characteristics (or none of these but you live in a high-risk area) always report it to your doctor or veterinarian – even if you are already vaccinated. Preventative treatment is the only cure because once symptoms start it is too late.

Can You Catch Rabies Off A Dead Fox?

Rabies is transmissible through saliva and/or some bodily tissues or fluids – so in theory it is possible to catch rabies from an infected dead fox. However, it is incredibly unlikely. It is almost unheard of any way for a human to die of rabies from a live fox (mainly due to getting rapid treatment for bites) – but the viral load is quite low anyway.

However, if this dead fox was even infected in the first place – AND still had any live virus on it – rabies can still only be passed on through broken skin or into the eyes/mouth/nose. Also, as advised in all cases: rapid wound washing in detergent and running hot water after any contact with a dead animal is very effective at denaturing any remaining virus.

So if you don’t touch dead animals – or you wear protective clothing when you do – you should be absolutely fine. Where Do Foxes Sleep? In Dens or Out In The Open? 🦊 Do Foxes Attack Humans And Are They Dangerous? 🦊 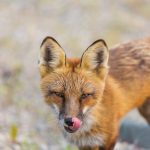 Do Foxes Attack Cats And Dogs? 🦊 Are Foxes Bad To Have Around Your House? 🦊 Do Foxes Attack Cats? And Why Would They?