Yes, a raccoon can eat a cat, small-sized dogs, and other small animals as well.
But raccoons are not a threat to your dog or cat’s life as much as to their general well-being.

Raccoons may appear to be playful and good-natured but beware of raccoons nonetheless. But they also have a reputation for being quite unpleasant at times.

Kittens are especially vulnerable if a raccoon is nearby. Despite its reputation for being cute and cuddly, a raccoon is still a wild animal and could very well attack a kitten and try to eat them.

Raccoons that roam freely about the neighborhood may seem relatively tame, but they sometimes get into a fight with cats. Cats can be territorial and aggressive, and they are especially sensitive if the raccoon is attempting to steal their food.

Furthermore, raccoons may sometimes prey on small animals that are kept outdoors, such as rabbits, chickens. When there is no other food around for them to get their paws on, raccoons may even attack kittens and small cats.

The ironic thing about this is that they can also get along just fine as long as your cat is willing to share. Many a startled cat owner has looked outside only to see their pet and a raccoon eating serenely side-by-side.

Healthy raccoons are not likely to fight with a dog unless provoked, but dogs will sometimes chase raccoons, and if cornered a raccoon will defend itself. They are known to be vicious fighters and when confronted by a dog will seek to scratch the dog’s eyes out in battle.

When it comes right down to it, raccoons present more of a threat to cats than they do to dogs. If you know that there are raccoons in your neighborhood, you should take the proper precautions to protect your cat.

For their own safety you should not permit your kitty to roam freely about the yard, nor should you leave cat food outside for your pet.

Not only can raccoons attack your cat, while stealing their food, but they can transmit rabies and other diseases, so even if your kitty has just a few scratches from a fight with a raccoon, it could still amount to something serious.

Do all Raccoons have Rabies? (another of our articles)

How to Protect Your Cat From Raccoons

While raccoons can be determined pests, there are ways to get rid of them without having to use poison.

In the end, raccoons are not a threat to your dog or cat’s life as much as to their general well-being. They won’t seek out your pets to dine on unless they are pretty small, and if the local food supply has dried up for them.

The greater threat is from the usual difficulties that arise with animals such as territorial disputes, fights over food, and the like. Then raccoons can become quite nasty and inflict harm on your dog or cat.

So if you know there are raccoons in your neighborhood, it’s best not to do anything that will encourage them to come onto your property for any reason. That way they won’t become a nuisance and you will keep your pet safe. 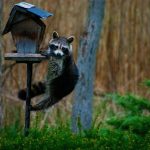 Will Raccoons Attack Cats? Can a Cat Win? Do Raccoons Wash Their Food? 🦝 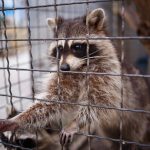